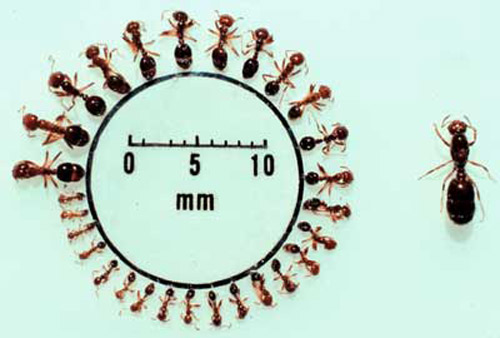 The environmental, agricultural and social impact.

The following information has been sourced from the Department of Agriculture and Fisheries Website.

Fire ants are one of the world’s most invasive species. If they establish permanently in Queensland they will ruin our way of life, and have serious health and environmental impacts. Everyday activities, such as barbecues, picnics and sporting events may no longer be possible in high infestation areas.  In the United States, people in fire ant infested areas have changed their habits to avoid exposure to the ant. For example, people do not have picnics on the lawn, go barefoot or sit or lie on the ground, or even stand for too long in one spot because they will be stung. Encounters with fire ants usually involve dozens of ants moving quickly and undetected. By the time they sting, a large number of ants could be on your body, all stinging at once. Stings from fire ants can cause a painful, burning itching sensation, which can last for up to an hour. Multiple stings give the sensation that the body is on fire.

Fire ants build a dirt nest or mound, which can be up to 40 cm high. An unusual feature of the mound is that it has no obvious entry or exit hole. The ants enter and leave via underground tunnels which radiate outwards from the nest and can be up to 30 m long. The ants themselves can range anywhere from 2 – 6mm in size, with a coppery brown body and darker abdomen.

Nests can also develop under logs, rocks or other materials lying on the ground. Fire ants appear to have an attraction to electricity, and nests have been found in buildings and equipment around electrical systems. 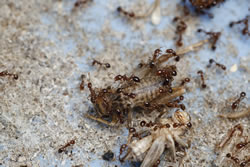 Fire ants can significantly affect the agriculture industry. They are very aggressive and are voracious feeders on small ground fauna, including insects, spiders, lizards, frogs, birds and mammals. Consequently, fire ants may displace or eliminate some of Australia’s unique native species. Newborn or hatching animals are particularly prone to attacks that can lead to death. Fire ants attack young animals and sting in and around the eyes, which can lead to blindness; and around the mouth and nose, which can lead to swelling and suffocation. Fire ants also invade the food and water supplies of animals. The animals are unable to reach the food or water without being seriously stung, and this can lead to starvation and dehydration.

Fire ants sometimes feed on seeds, and can fatally damage some plants by tunneling through roots and stems. They protect some species of pest insects that produce ‘honeydew’. This downgrades the quality of produce and assists in the spread of some diseases. Fire ants will also feed on important biological control agents and interfere with integrated pest management practices. Fire ant mounds can destroy equipment such as irrigation systems and can also damage machinery during harvesting operations.

Fire ants have been declared a notifiable pest and landholders must report suspected sightings of fire ants on their property to Biosecurity Queensland or face heavy fines. As part of the National Fire Ant Eradication program, Biosecurity Queensland undertakes a biogenetically engineered baiting program to effect only fire ants and is distributed within the vicinity of where a colony has been found. Let’s do our part in keeping Australia free from fire ants, and protecting our way of life as well as our environment through active awareness and reporting any suspicious ant activity!

How Arthy Rural Services is Helping

Due to the attraction of fire ants to poultry manure, it is declared a restricted item under the Bio-security Act 2014 and Bio-security Regulation 2016.  Under the Act companies operating in a fire ant bio-security zone and dealing with fire ant carriers (e.g. poultry litter) have a General Bio-security Obligation. Therefore, approved risk management plans must be followed to move poultry manure in and out of restricted areas.

ArthyRural Services is proactive in Fire Ant awareness, incorporating a Fire Ant  Risk Management Plan in our company Policies and Procedures. We are inspector approved and ensure our drivers are trained in fire ant surveillance and detection, with daily site and equipment checks and machinery wash/brush downs being recorded as a core preventative measure on every job we do within restricted and at-risk areas.

Previous Post Next
Tags
biosecuritydaffire ants
About The Author