On 400 acres at Round Mountain, running 200 head of Jersey and Guernsey cows, Laurie and Denise Dunne’s dairy is one of the few remaining in the Scenic Rim. After taking over from Denise’s parents (the Platell family) in the late 80’s, Laurie has created a sustainable farm resulting in the consistent production of milk on a daily basis.  With milk prices the best they have been in 20 years, Laurie says he finally has some freedom to experiment with pastures and focus on improvements in soil management.  It hasn’t been an easy life, as Laurie reflects on the challenges of the past and present, and the need to adapt with the land to survive. 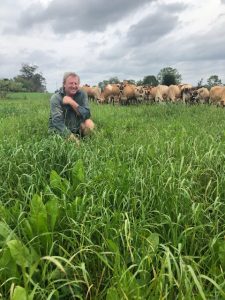 From the late seventies to early 2000, the Department of Primary Industries (DPI) philosophies were high on adding fertilisers providing a foundation for farmers based on the heavy use of urea.  Farmers were using more and more urea whilst getting less and less results, effectively poisoning and mining nutrients from the soil.  Everyone knew there was a problem but no one knew what the answer was.  The soil was like bricks, it lost its structure and wouldn’t let water penetrate. By the time Laurie took over, the dairy was using one to two ton of urea every month, of which 46% is nitrogen.

Laurie’s philosophy changed from ‘more is better’ in 2005 when Adam Willson, an ex DPI worker from NSW, and Gary Zimmer, an organic dairy farmer from Wisconsin, had arrived to do workshops with Sub Tropical Dairy.  Adam was working with horticulture and composting, and believed soil was a living component of a farm, with a myriad of microbial organic life which will create its own fertility.  Laurie learned that regardless of the type of farming, introducing nutrients and minerals was essential to healthy soil and thus his philosophy changed to the belief that healthy soils will mean healthy crops and healthy animals. This is where Arthy Rural Services became a part of Laurie’s journey, providing custom chicken manure and mineral blends (crusher dust, lime, gypsum, boron, potash, calcium, molybdenum) in a move to create a healthy, more organic environment for microbes to thrive, based on the needs identified through soil testing.

The first notable difference was the Crow’s feet disappeared from paddocks within one year of moving to a natural fertiliser. Previously the soil was too acidic, grasses wouldn’t grow well and the cows wouldn’t eat the bitter rye. It’s been slow progress, but after consistently using chicken manure every year, a soil blend every other year backed up with soil testing, Laurie has managed to turn it around. One paddock with naturally acidic soil (pH 5), this year tested at pH 8 (alkali).  Laurie has learned to adapt to survive, stating it’s not possible to find the perfect system that works all year round, he’s learned to adapt the soil each year for the type of crop and climate.

With improved soil, Laurie now works with the philosophy of feeding his cows a varied, nutrient dense diet.  Rye gives the bulk of feed in winter, then chicory and clover (Haifa, Crimson, Arrowleaf, Red) take over, and summer grasses will start to come through to feed until March.  Sorghum is planted early December for silage in February/March, then it regrows for grazing until early May after which Arthy Rural provides a natural blend for clover crops.  Laurie states his sorghum silage is a testament to the health of his paddocks, creating 18 ton per acre without any fertiliser at all.

When asked about challenges of the dairy industry, increased environmental issues including climate change, water management and odour; the more recent spotlight on animal welfare issues and activism; along with urbanisation and labour shortages easily came to mind.  Most notably however, Laurie reflects on the “bloody hard work since 2005”. It’s only the last few years milk prices have been favourable. Previously the deregulation of the dairy industry in 2000 saw the price of milk drop 50% in a few months, and just when the price started to stabilise, the introduction of Coles $1 milk in 2010 dropped the bottom out of the market again. Coupled with continuing advances in technology, bulk commodities are needed to make it work. Small farms can’t afford the technology to work them, but without technology the volume can’t be reached to make it feasible.

In moving forward Laurie believes the future of farming lies in microbial research and the environment within soil.

“Soil health is a new frontier, something we really don’t understand. We can play a little but the over-management of soil is essentially killing it, allowing die back of microbes to occur.  Our grandfathers understood soils better, they couldn’t ring Norco for a bag of urea, they had to understand the land and soil and work with it. Understanding you have a problem is the first step to solving the problem, then it takes time…”